You Can't Do Business with Hitler 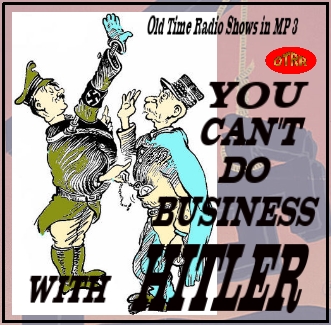 You Can't Do Business with Hitler

YOU CAN'T DO BUSINESS WITH HITLER

You Can't Do Business With Hitler, a series of radio shows, written and produced by the radio section of the Office of War Information (OWI), was transcribed four times a month. Elwood Hoffman writes the scripts, and Frank Telford directs the production. This series is one of the many thousands of government propaganda plays that were broadcast to help the war effort during World War II. You Can't Do Business with Hitler, based on the experiences of Douglas Miller, who was for 15 years commercial attaché to the American Embassy in Berlin. Douglas Miller reveals the NAZI technique of plundering and looting conquered lands. This transcribed program written by Elwood Hoffman and directed by Frank Telford was brought to you by the Radio Section of the Office for Emergency Management in Washington. OTRR Certification Information: Series Name: You Can't Do Business With Hitler Certification Status: OTRR Certified Accurate Certification Date: November 15, 2008 Certification Version: Version 2 Number of CDs: 1

Reviewer: ArtsieSteph - favoritefavoritefavoritefavorite - April 4, 2015
Subject: A great look at the attitudes of that time
I was looking for information in regards to a term paper on New Deal and WWII issues, and I was extremely happy to find this archive. I had no idea that recordings were so available, it is so wonderful to get into this digital time capsule.

As far as the overall quality of the recordings it's understandably warbled in some places, but the dialogue is perfectly clear.

And as far as political leanings and such, I am made a little uncomfortable at how propagandized the recordings were. But that too is understandable, since back then they used guilt, moral outrage, and fear as tools very often.
Reviewer: The Old Gaffer - - June 25, 2014
Subject: (A Review of the Previous Two Reviews)
This archive is about sharing and enjoying information, art, and entertainment from bygone eras of our culture. Please do not pollute it with hateful personal insults. There's no place for that here.
Reviewer: obamasuxs - - May 24, 2014
Subject: IDIOT
mrk65 you are an idiot. Get a life and move out of your mother's basement...
Reviewer: mrk65 - - October 10, 2013
Subject: What???
What do they mean? You can't do business with Hiter. Prescott Bush did, as a matter of fact, that scumbag did business with everyone. I'm willing to bet that his ancestors probably sold guns and booze to the Indians. The Bushes, generations of cretins.
Reviewer: WW II radio history guy - favoritefavoritefavoritefavorite - September 9, 2012
Subject: History and dates
This program was syndicated by the U.S. gov't to "educate" the American citezens why we were fighting the Germans. In early 1942 many Americans were still on the fence about fighting the war in Europe. After all Germany did not attack us, Japan did (even though we have been fighting U-boats before Dec 7, 1941). It was much the same as the Iraq war in recent times as far as public opinion, but outside the gov't than inside. Newspapers were still getting people writing letters to the editor against the war and the OWIOffice of War Information) wanted that stopped or slowed. In Chicago the program started airing on March 26, 1942 at 11:15 pm on a little station WDEC 1240 on the AM dial. Early 1942 was a very historic era for war time shows and I would suggest any history or WW II fan to take a listen.